You don’t see the 4-2-4 formation often in today’s game, but the gung-ho tactical structure of Brazil’s 1970 heyday is the only way to go for the latest Premier League Team of the Week.

There’s no other way of paying homage to the many strikers who bossed the third week of the 2019/20 season. Mohamed Salah fired Liverpool to a comfortable 3-1 win over Arsenal on Saturday, while Sergio Aguero was just as good when Manchester City beat Bournemouth by the same scoreline a day later.

Salah and Aguero had already been set a high bar by the efforts of Tammy Abraham and Sebastien Haller. They both bagged braces during wins for Chelsea and West Ham, respectively.

There is still some love for the men in the engine room, though. In particular, David Silva ran midfield on a landmark day at the Vitality Stadium and supplied the ammunition Aguero needed.

Find out who joins Silva and the division’s deadliest frontmen in the latest team of the week:

Even with James Tarkowski acting as solid as a rock in front of him, Nick Pope wasn’t short of work during Burnley’s 1-1 draw away to Wolves on Sunday.

The 27-year-old stopper ensured a gifted Wolves forward line led by Diogo Jota and Raul Jimenez stayed frustrated. Before the latter pinched a point from the penalty spot deep into stoppage time, Pope had made his share of key saves.

Perhaps the best was the dive to rebuff Ruben Neves’ low drive headed for the bottom corner three minutes from time. Pope’s solid form is not only keeping Joe Hart languishing on the bench, but it’s also solidifying a defense breached 68 times last season.

Crystal Palace taking three points from Old Trafford was the shock result of the weekend, even though the Eagles were strong on their travels last season.

Similarly, Patrick van Aanholt being named Man of the Match may surprise some, even though the Dutch left-back has been one of the more underrated players in the league for years.

Van Aanholt struck the winner in stoppage time after Palace had frustrated Manchester United’s efforts to score for 89 minutes. Daniel James equalized for the Red Devils in the penultimate minute, but Van Aanholt was worthy of playing the role of fate’s cruel hand thanks to his stellar performance.

Prior to his goal, Van Aanholt had thrived with sliding tackles and aggression in the air. His recovery pace meant the Eagles rarely lost shape at the back, while his impressive engine helped the 28-year-old maintain a consistent threat raiding forward.

This was a performance typically solid at both ends of the pitch from one of Palace’s best players who doesn’t get talked about enough.

If Palace caused a stir beating United in Manchester, Newcastle left one half of North London aghast by winning 1-0 away to Tottenham on Sunday.

The Magpies got an early goal from club-record signing Joelinton and protected it with well-drilled and stubborn resistance at the back. Paul Dummett was the player most often responsible for thwarting Spurs in the final third:

Operating in a back three skilfully constructed and deployed by manager Steve Bruce, Dummett was rarely caught out of position. His speed and timing across the deck made an ideal counterpoint to the patience of Fabian Schar and Jamaal Lascelles’ aggression.

The Magpies still have their critics, but Dummett is part of a defensive blueprint set to serve the club well this season.

When Leicester cashed in and sold Harry Maguire to United, the writing appeared to be on the wall for the Foxes’ defense. Not only had they lost their most high-profile center-back, but Brendan Rodgers’ attacking tactics looked sure to leave a depleted unit exposed.

Few of the naysayers counted on Caglar Soyuncu performing this well following Maguire’s departure. The Turkey international has slotted in alongside former United man Jonny Evans and given Leicester a formidable pairing in the middle.

Soyuncu had his best game yet during Saturday’s 2-1 win away to Sheffield United. He bullied Callum Robinson and David McGoldrick and never let runners from midfield break in behind.

The Blades challenge teams by overloading the attacking third with raiding full-backs and overlapping center-backs. Yet Soyuncu stayed calm and focused, identifying the most pressing dangers and dealing with them with little fuss.

He was also dominant in the air at both ends of the pitch. It was his header that fell kindly for Harvey Barnes to volley in the Leicester winner.

More performances like this and the league’s biggest clubs will surely start to pay attention to Leicester’s hidden gem.

Trent Alexander-Arnold still has some lapses defensively that likely make Jurgen Klopp’s blood run cold. Yet the Liverpool chief can forgive his right-back because of the defender’s extraordinary output in attacking areas.

Alexander-Arnold lofted a corner onto the head of Joel Matip for the Reds’ opener against the Gunners to continue a hot streak for creating goals:

Liverpool remain one of the most effective attacking forces on the continent despite no genuine creative talents. There’s no No. 10 teeing up strikers at the top end, nor is there an astute playmaker general dictating play from deep.

Instead, the Reds stay in the goals thanks in equal measure to the variety of their front three, along with the contributions of Alexander-Arnold and fellow full-back Andy Robertson.

Mateo Kovacic was little more than a steady citizen during his first season at Chelsea. Too many times the Croatia international seemed content to settle for the safe passes on Maurizio Sarri’s watch.

Frank Lampard replacing Sarri in the dugout has seen some daring enter Kovacic’s game. The former Real Madrid schemer was the best midfielder on the park during the Blues’ 3-2 win over Norwich on Saturday. 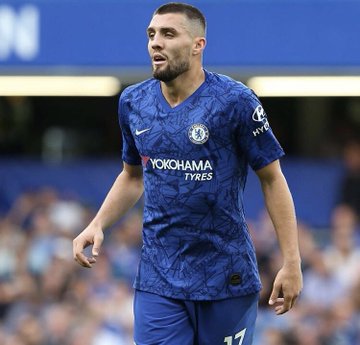 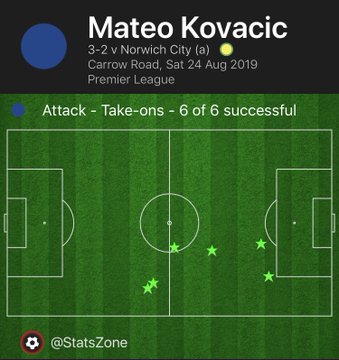 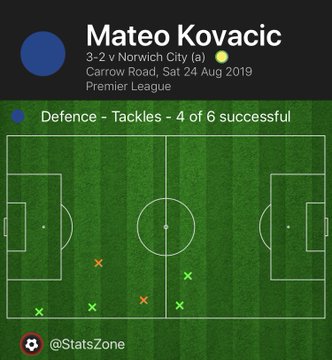 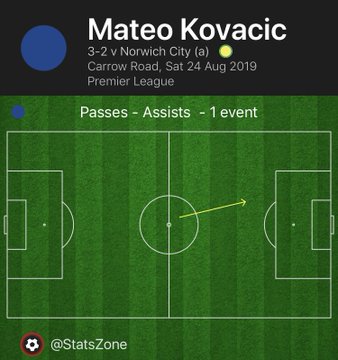 While youngsters such as Mason Mount and Tammy Abraham are coming to the fore under Lampard, Kovacic has benefited more than most from his manager’s bold tactics.

David Silva’s career has been defined by a gift for doing the right things at the right time. So it was fitting he chose his 400th City appearance to have one of his best games.

The pocket-edition pass-master was class personified when he got on the ball. City kept the ball away from Bournemouth and manufactured chance after chance thanks to Silva’s deft touches, speed of thought and imaginative movement.

His best contribution was the pass to set Raheem Sterling free to score.

One such combination led to a penalty when Haller pinched the ball and set Manuel Lanzini clear. Mark Noble converted the ensuing spot-kick, and the Hammers were well on their way to a first win.

Haller kept the game in West Ham’s favor by tapping in from Felipe Anderson’s low cross, before scoring his second with an acrobatic overhead kick.

If you’ve ever wondered why and how Aguero gets so many goals, his performance against Bournemouth offered answers. The Argentinian converted two chances he easily could have let pass him by.

On both occasions, Aguero found a finish after staying on the move to follow the play. Pouncing on a loose ball each time, Aguero took the opportunities his industry merited without any fuss.

Staying on the move shows the 31-year-old’s appetite for goal has never waned. It also explains why Aguero has achieved a rare landmark:

With four goals to his credit already, this could be Aguero’s best season of a glittering career.

As somebody who firmly believed Olivier Giroud was the best choice to lead the line for Chelsea, I was more than a little surprised by Abraham’s match-winning display at Carrow Road.

The 21-year-old ran the Norwich back four ragged. His pace and timing consistently helped drag defenders out of position and offered a target for the vision of Kovacic, Mount and Co.

When it came to finding the net, Abraham took both of his goals superbly. The first was a controlled volley, sweetly struck after Abraham adjusted his body and set himself.

His second goal showed off the speed, technique and shooting power defenders fear.

If Abraham can display this kind of composure in front of goal more often, Lampard will be content to leave Giroud in the wilderness.