‘What a final’ Dramatic Super Over England Won Kiwis So close Yet so Far.

Why boundaries only, why not wickets are considered for choosing the tied super over winners.

England are a boundary hitting team…NZ are Accumulators. In the end, the new brand of English cricket came to their rescue. More boundaries. Investment of four long years paid off…on the biggest night. Well done, England.

‘What a final’ Dramatic Super Over England Won Kiwis So close Yet so Far.

In a dramatic end to the Wolrd Cup finals, England defeated New Zealand with more number of boundaries to lift the coveted trophy for the first time at Lord’s. As the 50-over clash ended in a tie, the match entered Super Over. In the Super Over, England batted first and the duo of Ben Stokes, who kept the hosts in the game with a brilliant 84 off 98 balls, and Jos Buttler made 15, and New Zealand also ended at the same score but for the loss of one wicket, paving the way for an English victory on boundary count.

Earlier, New Zealand scored 241 for eight after opting to bat and hosts England were all out for exact score in the last ball of their innings.

“I’d like to commiserate Kane and his team. The example that they lead is hugely commendable to him and his team. On a tough wicket where everyone found it tough to score. Buttler and Stokes put together a partnership, and I thought that would take us deep, and it did. This has been a four-year- journey – and we find it hard to play on wickets like that. To get over the line today means the world to us. I was being cooled down by Plunkett, which isn’t a good sign. Some of the support staff – not only the best in our team, but in the world, they really helped. Full credit to the two boys who went out for the superover, given that they were there most recently. Archer just improves every time he goes out there.

Really incredible – everyone in the change room today, Willey, Billings, whoever missed out on the squad – I’d like to mention them too.”

We were thinking about the overheads. We thought runs on the board – we would have liked 10-20 more. But in a World Cup final this was a competitive total. The bowlers really put the batsmen under pressure. It had to go down to the last ball, and then the last ball of the next little match, but a great match all round. It was a shame that the ball hit Stokes’ bat, but I just hope it doesn’t happen in moments like that. I don’t wish to nitpick, just hope it never happens in such moments ever again. The left-hand right-hand combination was useful in the super over, looking at the short boundary, but it’s unfair to critique a match fought with such small margins.”

“It certainly wasn’t one extra run. There were so many moments that could’ve gone either way, but congratulations to England – they’ve had an incredible campaign and they deserve it. The pitches have been different to what was expected. No 300+ totals as expected. The NZ side showed a great amount of heart to get us to this point, but it just wasn’t meant to be. The guys are shattered at the moment – it is devastating. It’s pretty tough to swallow at this stage. But a fantastic effort from our guys.”

“Pretty good innit? I’m pretty lost for words. All the hardwork that’s gone on in these four years, and to execute with such a good game is unthinkable. Thanks to everyone for all the support. We just kept talking during the partnership with Jos, and the run-rate wasn’t getting away, and in the last over when the ball hit the bat and went for four – I apologize to Kane for that. I definitely wasn’t going to bowl the last over (laughs). It’s fantastic, without the lads, the family, and the support, it’s just been incredible.”

Spare a thought for Kane Williamson & company !!So close, yet so far. But so much to be proud of. 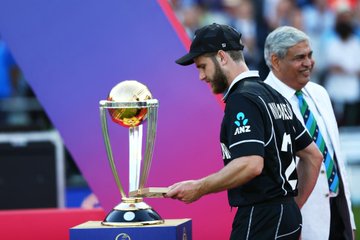 Player of the series in World Cups:

Man of the Match in World Cup finals:

“Massive commiserations to the New Zealand boys. Edges one way, edges another. The way the guys came back in the Super Over was fantastic, and Stokes was huge. To play at Lord’s is one thing, to play a World Cup final at Lord’s is something else.”

“I thought I’d seen everythign in cricket, and that game was just ridiculous. Hard to put it in words. We wanted to take it deep. We didn’t feel like the run rate would be an issue if we were both there in the end. A couple of good partnerships, we’ll chase this down. Trying to put pressure back on New Zealand. Don’t know what happened there in the end. Unbelievable.”

“It’s almost written in the stars for Ben. Everything he’s gone through, I can’t be more proud and pleased for him.”

Liam Plunkett: “Hasn’t sunk in yet. What a finish that was. Hats off to the Kiwi boys. Over the moon.”

Ben Stokes: “I’m pretty lost for words. All the hard work over four years to get here, and to be champions of the world is an amazing feeling. Playing against New Zealand is always a great event to be a part of. They’re a seriously good team, they’re a bunch of good lads. I spoke to Kane, I apologised (for the deflection for overthrows).”

Jofra Archer: “Was pretty sure I was going to bowl it. Just had a chat with Morgs (starts chuckling) heart’s still racing, sorry. It’s probably the only tournament I’ve ever won in my life. From the beginning, the guys did so well. Would have been disappointed if we didn’t win. They’ve been a really good family to me.” 7.40pm England’s players troop back through the Long Room and back onto the field. New Zealand’s players are slumped on the grass.